The Fastest Circumnavigation on record* (done at altitude) 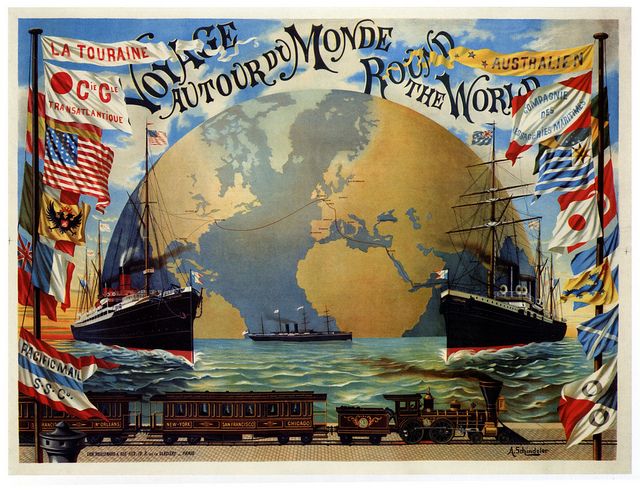 They call it the sleigh ride: the three-hour flight on a ski-equipped Hercules cargo plane from the U.S. base at McMurdo to that most exotic of Antarctic destinations: the South Pole.  Schoolboy keen, I showed up early at the airstrip, bundled up, bags packed, eager to go.  It was the summer of 2000. I was in Antarctica on an assignment for National Geographic. I was bound for Amundsen-Scott South Pole Station where I was supposed do a story on the future of science at the Last Place on Earth, talk with climatologists about such worthy topics as global warming and the ozone hole, and write a side piece about the construction of the new $150 million super-high-tech base the Americans were then in the process of building.

Unbeknownst to my editors, I had a hidden agenda as well: to ride a bicycle around the world.  I’d always wanted to circumnavigate the globe by bicycle, but could never find the spare year or so such a journey would take.  At the South Pole, however, where all the lines of longitude come together, not only could I ride ‘around the world’ on a flat course free of traffic, but I could do it in a time that would make even the International Space Station’s ninety-minute orbits seem pedestrian by comparison.

A few quick turns of the pedals was all it would take – just perform a tight circle around the pole itself and I would have passed through every single line of longitude, both the Prime and Ante Meridians, and geographically speaking, could claim to have ridden round the world.

There was even a bicycle already there on which I could do it. In the course of my worthier research into the goings-on at Pole, I learned that a team of design students from the Art Institute of Pittsburgh, working in conjunction with scientists from the U.S. Antarctic Program, had recently built a ‘Polar Bicycle’ for use in the South Pole’s extreme conditions.

The well-intentioned idea was that given the high cost of getting fuel to Antarctica, and the sensitivity to pollution of the astronomical instruments at the South Pole Observatory, a half mile away from the base, using a polar bicycle to get around could be just the thing. A prototype had been built and shipped down to Pole for testing – and when I asked about it I was told, yes, sure, I could take it for a spin.

The Sleigh Ride to ‘Pole’ was magic, three-hours of high adventure, following at 22,000 feet the route taken by both Scott and Shackleton back in Antarctica’s Heroic Age: across the Ross Ice Shelf, through the towering peaks of the Trans-Antarctic Mountains along the Beardmore Glacier, up to the hauntingly empty vastness of the high polar plateau.  Amundsen-Scott base, when I eventually spotted it in the distance, looked almost frighteningly remote, a few scattered specks of colour in an immensity of white that stretched to every horizon.

We circled once and then the big turbo prop touched down, its skis kicking up a blizzard of snow.  The hatch opened and we emerged, blinking, into a dazzlingly bright, bitterly cold, alien world. The the air was razor thin at nearly10,000-foot and a double halo circled the sun. Home for the next few days was a great blue Plexiglas dome that belonged more to the realm of science fiction than real life.  The outside temperature on that balmy summer day was minus-33, the wind chill minus-61, while in the dimness beneath the dome, where the sun’s rays never reached, the temperature stayed at the Poles constant year-round average of about minus-60.

But all was pleasingly snug and warm inside Sally’s Galley, as the base canteen was affectionately known.  Cramped and crowded, with lots of heavyweight red parkas hanging on hooks along the walls, it made me think of a truckstop café on the Alaska Highway, circa 1975.  Meals here were hot and hearty – 5000 calories a day was the reckoning for people living and working in the extreme conditions at Pole – and there were always pots of steaming coffee on hand, trays of fresh-baked chocolate-chip cookies, and generally plenty of amiable company to be found there as well, for Sally’s Galley was the social hub of the base.

It was there, the following day, over mid-morning coffee and chocolate chip cookies, I met Jeffrey Petersen, an astrophysicist from Carnegie-Mellon University who, it turned out, was Pole’s resident wheelman, commuting back and forth between the dome and the futuristic astronomy complex half a mile away – not on the newly build Polar Bicycle, I ight add, but on a standard mountain bike with studded tyres he’d brought down with him.

I asked about the Polar Bicycle. He took me around to see it.  It was quite a piece of work.  With its chunky frame and seven-inch-wide steel-mesh tyres it was never going to make me forget my Italian road bike back home, but then Italian road bikes aren’t designed to run in minus-80 temperatures, and be operated by someone wearing huge fur-lined gauntlets and enormous insulated ‘bunny boots’ that are standard South Pole-issue.  This one was.

I hopped aboard.  Jeffery grabbed his mountain bike and together we pedalled off to trot the globe.

And yes, in  case you’re wondering: there really is a pole at Pole.  There are two of them in fact: the barber-striped ‘Ceremonial Pole’ with all the flags around it, where everyone goes to have their photo taken in Hero mode, and the ‘real’ South Pole. Because the ice cap shifts thirty feet or so each year, the precise position of 90ºS is recalculated each January by GPS and a marker placed on the exact spot.

Wanting to cover our bases, so to speak, we looped both versions of The Pole. We looped them many, many times. We pedalled east to west, west to east. We raced each other, cracking jokes and playing the location for all the quirky humour we could conjure. We even paused to wind our watches for the different time zones.  As far as handling goes, the Polar Bicycle made a Mao-era Flying Pigeon look as light and responsive as a Pegoretti – Jeffrey’s mountain bike performed far better – but all the same it was a fun toy to play with out there on the high polar plateau. Finally when we’d had enough, and were chilled to the bone, we turned for home and pedalled back to the sheltering warmth of Sally’s Galley.

Our fastest times, we reckoned, was somewhat under ten seconds, or as I like to think of it now, we lapped the entire world in around the time Usain Bolt can run a hundred metres.

Alas, our record doesn’t stand.  I’ve since learned that the nice folks at the Guinness Book of World Records are rather pernickety when it comes to round-the-world cycling records. They expect you to suffer a little more than we did, the morning’s minus-72 windchill and Pole’s thin air notwithstanding.

They expect hills, traffic, bandits, bad food, bad roads, near misses, and hairbreadth escapes. They want you to cycle at least eighteen thousand miles, to be precise, not spin through three-hundred and sixty degrees of longitude during your morning tea break as we did on a sparkling day at the South Pole, and then trot inside for milk and cookies like a couple of overgrown kids in the world’s biggest winter wonderland. Still, we did cross every single line of longitude…perhaps they could give us the record but with an asterisk: done at altitude.